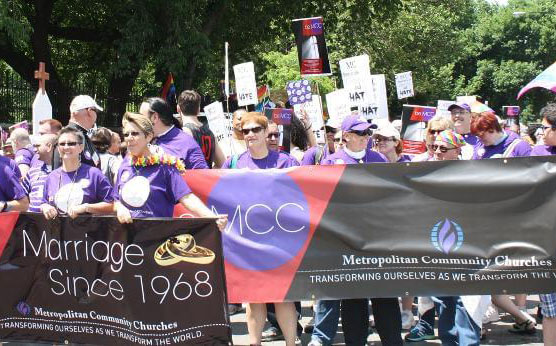 Since then, MCC has grown from a few churches in the 1970s, when we were known as “the Gay Church,” to hundreds around the world by the 1980s when we became known as “the AIDS church,” to our current configuration which many dub “the Queer Church.” As a global movement comprising churches, spiritual communities, emerging ministries, clergy and lay leaders, human rights activists and many others, our goal is to “Transform Ourselves as we Transform the World.”

Since our founding, MCC has been a reliable refuge for LGBTQ people and others who have been taught that who they are, whom they love, or what they believe is “sinful” or unwelcome in other communities of faith. In our churches around the world, people have re-discovered and re-claimed their identity and worth as people of faith. It is from our spiritual center, and because of our calling to follow in the way of Jesus, that we reach out to make our world a better, more loving, more just and more equitable place.

Throughout our history, MCC has been at the vanguard of civil and human rights movements by addressing issues of race, gender, sexual orientation, economics, climate change, aging, and global human rights, as well as the intersections of these and other oppressions. As a movement born in the margins of society, we remain a prophetic and pastoral presence from/to the marginalized peoples of the world.

To read more about MCC in our own voices, visit “Hear Our Voices” at visitMCCchurch.com.