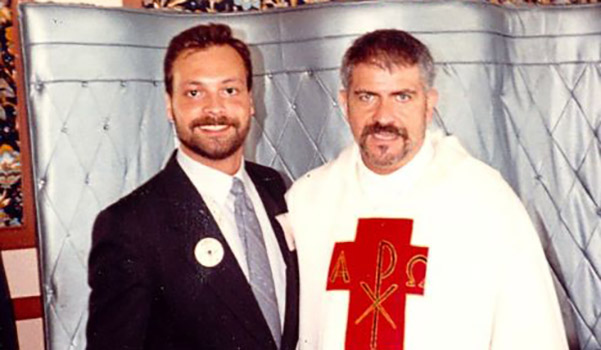 What Follows is a summary of MCC’s EARLY history through the eyes of our founder, Rev. Troy Perry.

In 1968, a year before New York’s Stonewall Riots, a series of most unlikely events in Southern California resulted in the birth of the world’s first church group with a primary, positive ministry to gays, lesbians, bisexual, and transgender persons.

Those events, a failed relationship, an attempted suicide, a reconnection with God, an unexpected prophecy, and the birth of a dream led to MCC’s first worship service: a gathering of 12 people in Rev. Troy Perry’s living room in Huntington Park, California on October 6, 1968.

That first worship service in a Los Angeles suburb in 1968 launched the international movement of Metropolitan Community Churches, which today has grown to 43,000 members and adherents in almost 300 congregations in 22 countries. During the past 36 years, MCC’s prophetic witness has forever changed the face of Christianity and helped to fuel the international struggle for LGBT rights and equality

These edited excerpts are from “The Lord Is My Shepherd, And He Knows I’m Gay” authored by MCC Founder and Moderator, Rev. Troy D. Perry.

In the early 1960s, Rev. Perry was defrocked as a clergyperson by a Pentecostal denomination because of his homosexuality. He spent the next several years struggling to reconcile his sexuality and his Christian spirituality.

In Part I, Rev. Perry describes the events that preceded the first worship MCC service:

Use the slider below to select between parts 1-4 of MCC’s rich history.

Troy Perry had fallen deeply in love with a young man named Benny. Perry was stunned when Benny came home one day and announced the relationship was over. I looked at him and I asked, “Benny, is it really over?”  He looked at me, and smiled, and said, “Yes, It...
Read More

In 1968, Troy Perry was stunned when his lover Benny announced that their relationship was over. In his desperation and depression Perry attempted suicide. Following the failed suicide attempt, Perry experienced a renewed sense of spirituality. He began to pray again....
Read More

In 1968, Troy Perry was stunned when his lover Benny announced that their relationship was over. In his desperation and depression Perry attempted suicide. Following the failed suicide attempt, Perry experienced a renewed sense of spirituality. He began to pray again....
Read More

The first MCC service took place on October 6, 1968. Rev. Troy Perry’s friend and roommate, Willie Smith, was skeptical of Perry’s plans for a church that would minister to the GLBT communities. But after the very first service, Smith’s thinking began to change: After...
Read More

Click the button below to be taken to MCC’s Resource Bank for complete information about MCC’s History, as well as references to other historical works. This resource folder may also contain the history of various local, regional, or national bodies of MCC.