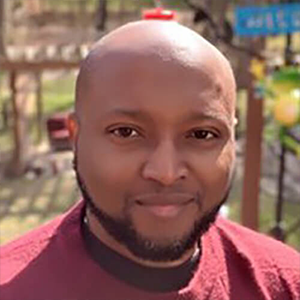 Mark Godette (he, him, his)

Mark started with MCC more than 15 years ago. He left while exploring other options and returned in 2013. He is currently serving a second consecutive term as a member of the Board of Directors at his local church, St. John’s Metropolitan Community Church. He has served as Treasurer, Assistant Treasurer, Member at Large, and his current role as Vice Moderator.

In 2015 Mark earned the certificate in the MCC Lay Certificate Program, Laity Empowered for Active Discipleship (L.E.A.D.). He also earned a certificate to teach the Creating A Life That Matters (CLM) program, and he is serving a five-year term in MCC’s Judicial Pool.

Mark and his husband, Rick Godette, have been together for 26 years. They were officially married in 2015 at their home in Knightdale, North Carolina, USA surrounded by family and friends. They are both active members of St. John’s Metropolitan Community Church in Raleigh, North Carolina, USA. They have three adopted children and have fostered several children, from ages 2 to 19 years of age. 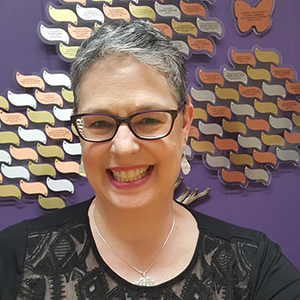 Rev. Marie Alford-Harkey (she, her, hers)

Marie holds a Master’s in Divinity from the Episcopal Divinity School in Cambridge, Massachusetts, USA. As president of the Religious Institute, Marie puts her faith to work alongside her passion for justice. She is a skilled communicator and relationship-builder, and delights in collaborating across faith traditions, justice movements, and all kinds of difference.

Marie has a chapter on “Sexual Justice in an Age of Trump” in the 2017 book Faith and Resistance in the Age of Trump and is the lead author of the Religious Institute publication Making the Invisible Visible: Bisexuality in Faith Communities. Marie speaks, teaches, and preaches regularly on faith and sexuality.

Marie serves as volunteer assisting clergy at MCC Hartford, Connecticut, USA, and also served as sabbatical pastor there for two months this year.

In her previous life, Marie taught high school French and Spanish for 20 years. Marie and her wife April Alford-Harkey (they met at Episcopal Divinity School), an Episcopal deacon, live in Milford, Connecticut, USA with their cat Memphis and April’s ministry dog, Sandy. 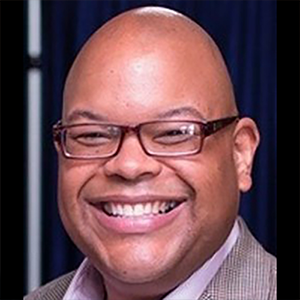 James Chavis (he, him, his)

Originally from New Jersey, James grew up in the Presbyterian Church and was ordained as an Elder, leading the youth for just over three years.  In addition, he served on the church board serving a congregation of more than 500 members.

Upon moving to Texas USA in 2003, James attended various MCC churches in Dallas and Fort Worth. Finally settling down in San Antonio, he found his church home at MCC San Antonio. In 2014, he became a member and began serving in the choir and helping in other ministries in the church. James was appointed to the church board in 2015, still continuing to serve, he has held the position of risk manager, and now vice moderator.

James brings various levels of work experience including business and human resources. Currently working in education with 16 years experience, James has been a Teacher, Counselor, Coordinator, Director and now Interim Superintendent of a charter school district. He currently holds a Masters Degree in Educational Administration and Supervision from University of Phoenix and a Bachelor of Science degree in Management from Park University. 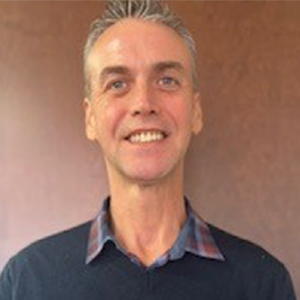 Chad is the Manager of the IT PMO (Project Management Office) at WellCare Health Plans. In this role he is responsible for a team of 10-15 Technical Project Managers and overseeing that they manage their multiple projects through all cycles of the Project Lifecyle and ensuring they are completed on time and within budget. This role regularly challenges me to think outside the box and come up with creative solutions to manage and eliminate obstacles; as well as personnel management.

He lives in sunny Tampa, Florida, USA with his husband of over 12 years (celebrating our one year wedding anniversary on 4/27!), Samuel Asencio,  and their 3 fur babies (cats) Pastina, Bailey and Kailey.

He has been a member of MCC Tampa since 2009 and attending since 2006. He has served in a variety of roles, including 5 years as the Treasurer on the Board of Directors, a member of the Pastoral Search Committee; and served as the part time Bookkeeper from mid 2015 to mid 2017. Chad was also elected to be a Lay Delegate in September of 2016 and has been an active member of the inaugural Pastoral Relations Committee at MCC Tampa since 2017. He has had an interest in the wider denomination since getting to work with many wonderful people through his various roles at MCC Tampa and that interest only grew after attending his first General Conference in beautiful Victoria, British Columbia, Canada in 2016. At the denominational level, Chad’s work includes him being a member of the Assessments Commission that was responsible for restructuring the assessments structure for UFMCC. The Assessments Commission’s proposal was approved by a vote of the body and took affect in January 2019. In addition, he is currently very active on the Programming Team and the 50th Anniversary Gala Planning Team for General Conference 2019; and will be assisting with all AV needs at GC.

Chad loves the mission and work of MCC and is dedicated to being a part of it.

Rev. Alberto Nájera (he, him, his)

A native of Nicaragua in Central America and a Christian for over 32 years from childhood, Rev. Alberto grew up in the Pentecostal tradition where he assumed increasing ministry responsibilities in the areas of children, youth, and evangelism with the Evangelical Pentecostal Church in Nicaragua. Alberto first came to MCC Peace and Joy in Nicaragua in 2000.  In the years that followed his participation was marked with great passion and commitment: as he was ordained a deacon in 2002; later appointed as interim pastoral leader; and in 2006, after an intensive process of theological studies, training, accreditation, recognition of studies completed, and under the leadership of Rev. Elder Darlene Garner, he was ordained as clergy in UFMCC.  At that time, Rev. Nájera continued to serve as pastor of MCC Peace and Joy in Managua, Nicaragua and Founder of three groups ICM Mission in Chiriquí, Colón, and Panama City in Panama.

Alberto is also a journalist who has worked professionally in radio, television, magazine publishing, and public relations; other previous work includes experience with various NGO’s in both Nicaragua and Panama where Rev. Nájera provided leadership and developed programs in the education and prevention of HIV/AIDS.  As an important part of this work, he coordinated the “Peace and Joy” Social Action Program – a partnership between the MCC church in Nicaragua and various community organizations to provide education, communication, prevention programs, pastoral and spiritual support to families and people living with HIV/AIDS.

In the United States, his professional focus includes teaching in public school and working with The LGBT Life Center of Hampton Roads, Virginia as a community health worker and medical case manager in the areas of HIV/AIDS prevention and care. Since 2013 Rev. Nájera has served as staff clergy for Latino and Community Outreach at New Life MCC of Hampton Roads, Virginia, USA.  In this role, Rev. Nájera began and leads the church’s Spanish Language worship, taught Spanish classes for the church and community, and has helped to coordinate both church and community involvement for marriage equality and various other human rights issues both in Hampton Roads and in Richmond, Virginia.

In addition, Rev. Nájera has provided support to the Unidos Latino ministry of MCC Washington, District of Columbia, USA and has served on the international judicial pool of MCC since 2012. Through the years, both in Nicaragua and after coming to the United States, Alberto has remained close to his family.  With his parents and three older siblings his early years were spent on a rustic mountain cattle ranch where Alberto developed a lifelong love for riding and horses.  Today, he lives in Virginia Beach, Virginia, USA with his husband, Rev. Mark Byrd and their yellow lab, Nica. 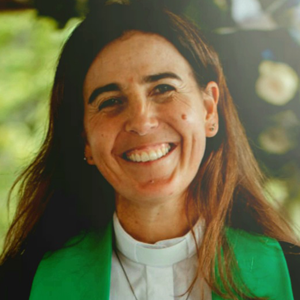 Rev. Beulah Durrheim has been the solo pastor at Good Hope MCC, an inner city church based in Cape Town since 2012. She has a theology degree from the University of Southern Africa. She served as a pastor in the Methodist Church for almost 10 years, and was a Spiritual Director for Upper Room Ministries in South Africa. She has served in various denominational capacities in MCC: The moderator nominating committee, as a member of the judicial pool, and as an Africa Network Leader. Besides her 20 years of pastoral ministry she also worked at a bank, a paint sales company, a pre-school and a conference centre. She was often entrusted with managing these businesses and learnt to deal with finances, staff and clients.

Rev. Durrheim initiated her own small businesses, establishing a Retreat Ministry and setting up a Bookshop. In all of these experiences she discovered she is a leader, skilled at working with diverse people, able to manage budgets, seeing creative angles to solving problems and being willing to learn from her mistakes. She loves the great outdoors and has walked the Camino in Spain several times. She enjoys running in the mountains and loves doing endurance sports that test her physical and mental strength. She was in a long-term relationship for 20 years which ended in 2019. She has learnt to navigate pain and loss and has become resilient when it comes to dealing with change. She values integrity, community, humour, empathy, commitment and paths that lead to healing and compassion. 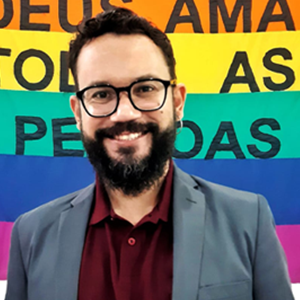 Léo Rossetti has been a member of ICM Rio since 2007. At 38 years old, he is a young adult leader and enthusiast of the global presence of Metropolitan Community Churches in Brazil and worldwide. Léo is a historian, history teacher, has a Master’s degree in History Teaching and is about to finish his Doctorate in Social History, both at the University of the State of Rio de Janeiro. Léo has discovered and developed his special call to global ministry at MCC. With significant experience as a volunteer translator within the denomination, he has also served on various global MCC teams, commissions and committees.

He is the author of the motion that led to the creation of the UFMCC Commission on Communications at the Orlando General Conference, 2019. In addition to Portuguese, he speaks English and Spanish (and also LIBRAS, the Brazilian Sign Language). Léo is also an actor, poet and author of books, including “Tropical butterflies: the Brazilian Way of the Metropolitan Community Churches” (Metanoia, 2016). He has been married for 14 years to Rev. Luiz Gustavo Silva, senior pastor at ICM Rio, and both live in the city of Rio de Janeiro together with Safira, the couple’s feline daughter. 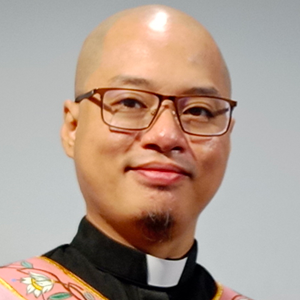 Prior to becoming a Pastor, Rev. San Jose worked in the sector of Financial Markets for 7 years, working for Thomson Reuters and ETrade Financial. He believes in the continuing mission of MCC to proclaim God’s love for all people; create and sustain safe spaces for queer people; and MCC’s participation in the wider work of justice in the world. He also strongly believes in the representation of peoples raised-up and living outside of North America and Europe, especially Asians living in Asia, in the governance of MCC. He is currently living in San Pedro, Laguna, Philippines, with his Partner of 7 Years, Lawrence, with their fur children, Duke and Duchess.